A Brief History of the Sag Harbor Yacht Club

The Sag Harbor Yacht Club, one of the 100 oldest yacht clubs in America, is located on the South Fork of the East End of Long Island, New York.  The small waterfront village of Sag Harbor, home of the Sag Harbor Yacht Club, has a rich and colorful maritime history dating back to approximately 1700.  Sailing, shipping, fishing and whaling all contributed to the early tapestry of “The Harbor”.  One of the original two U.S. Ports of Entry, the other being New York City, The Sag Harbor Customs House was, along with its counterpart in NYC, a major source of revenue for the newly formed United States Federal Government. 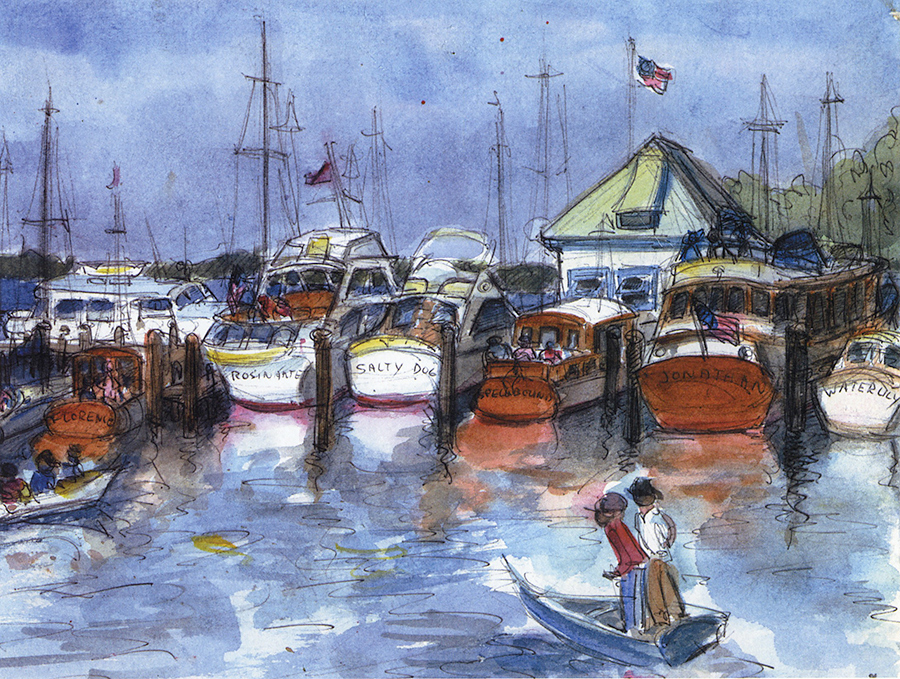 Never having lost sight of its past, today Sag Harbor is a charming, vibrant village that has maintained a warm and friendly character.  The center of town boasts many fine shops, banks and restaurants.  The extensive and active waterfront area has a mix of marine facilities, yacht clubs, restaurants, parks and municipal facilities.  The picturesque harbor has mooring fields both within and outside of the protective breakwater.  Beyond the jetty are Shelter Island Sound, North Haven and Shelter Island.  With its Historical District, a good amount of the residential area of the Village still exhibits its rich architectural lineage.  Its small town atmosphere, churches, library, whaling museum, and parks, all add to its appeal. 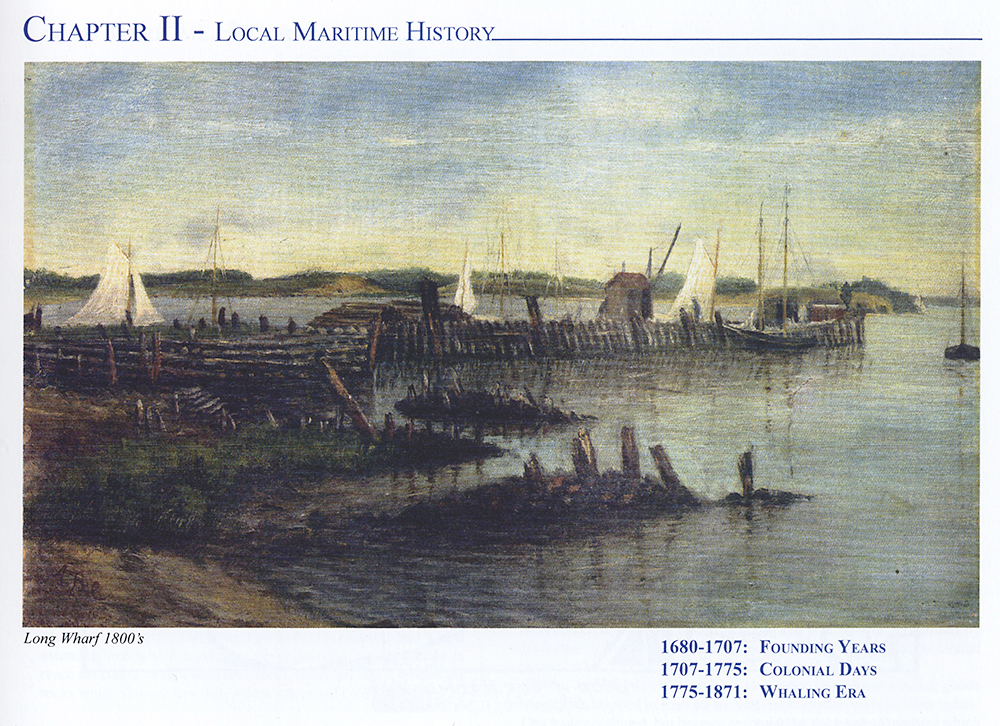 The beginnings of local recreational sailing were first noted in our local newspaper, The Sag Harbor Express, in late August 1879.  The first mention of competitive sailboat racing here dates back to 1886 with 34 boats in regatta on September 14th of that year.  There were two “fleets” sailing in Sag Harbor at that time.  They were “the cove fleet” for smaller boats and “the harbor fleet” for larger vessels.  The members of the cove fleet founded “The Volunteer Boat Club” on August 15, 1887.  The name “Volunteer” may have been chosen for the America’s Cup defender that year, which had the same name. The Volunteer Boat Club would last until 1899, when The Sag Harbor Yacht Club received its charter from the State of New York.

On March 17TH, 1897, a meeting was held at the Astor House in New York City to found a new yacht club.  Members of the two local sailing fleets joined ranks and formed “The Sag Harbor Yacht Club”.  The new club boasted nineteen members that first year.  The incorporation and chartering followed in 1899.  The Mission Statement, in part, was “…. to purchase or acquire property and erect and maintain a house for the use of Club members and their friends, and, to further and promote interest in all branches of yachting, yacht racing and yacht building…”  Also in 1899, a 100 foot long dock was constructed near the bridge that joins Sag Harbor to North Haven.  In 1902 “a waiting room structure” was added to the dock.  This would be “home” to The Sag Harbor Yacht Club until 1913. 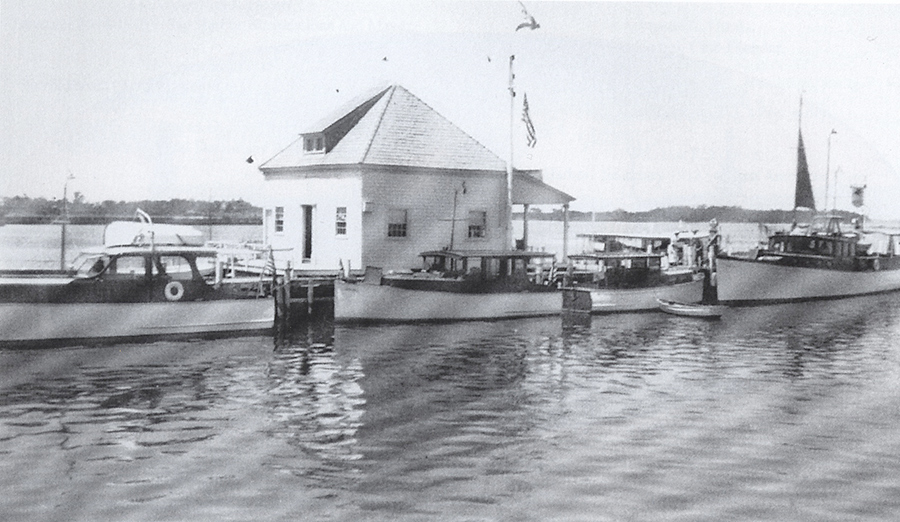 The long awaited jetty, that would shelter the Bay Street area from northeast storms, was federally funded in 1902.  Construction began that year and was completed six years later.  With Bay Street protected by the new jetty, our yacht club could now look for a permanent home.  Through the generosity of Frank Havens, two lots, on Bay Street, were deeded over to the Club and have, to this day, been our home location.   In 1913 the main dock was built on that site.  In 1914 our present day clubhouse was purchased from The New York Yacht Club.  It had been their Station #5 located on Shelter Island.  It was then barged to Sag Harbor and installed on our dock, as the new SHYC Clubhouse.  Rich with history and a survivor of many infamous storms, including the ’38 Hurricane, and, more recently, Hurricane Sandy, this same clubhouse proudly stands on our dock to this very day.

Club activities waned during WWI, then recovered through the Twenties, and again, waned throughout the Depression and WWII.  During that period of time a major transition from sail to motor vessel took place.  As noted previously, our Club facilities were fortunate to survive a number of storms of historic proportion.  The Great Hurricane of 1938, many a nor’easter, the hurricanes of the Fifties and more.  Even with these weather setbacks, our Club expanded its main dock facilities, and, added its eastern dock.  The stage was set for growth as the yachting community “discovered” this haven on the East End. 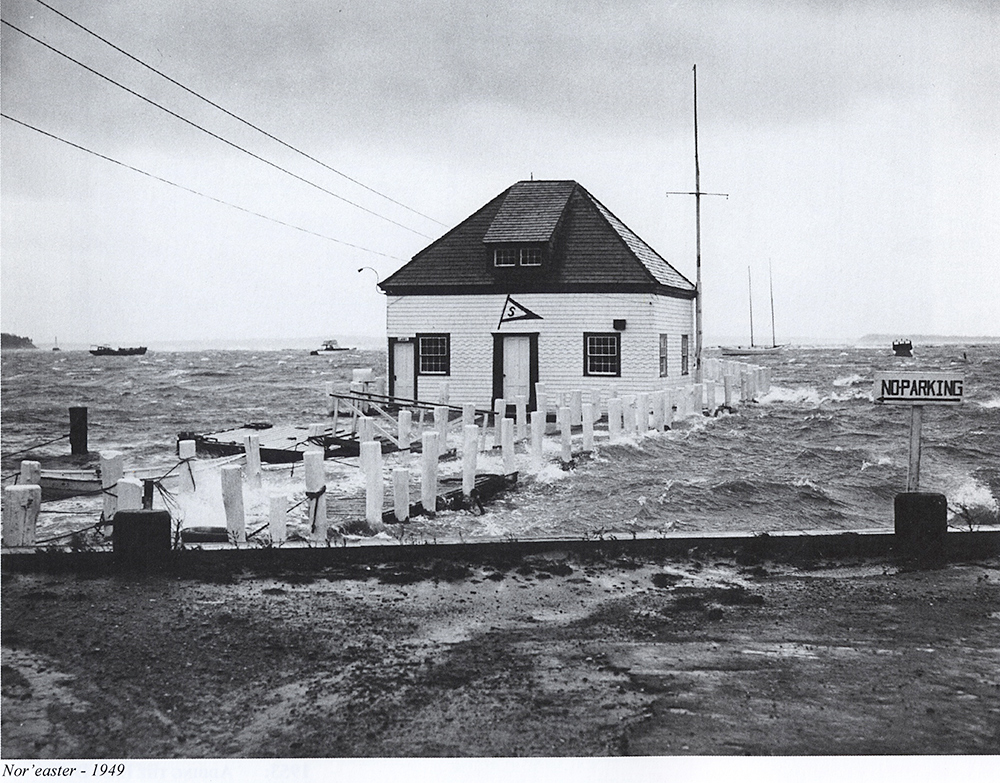 With our history deeply entwined with local sailing, the Maycroft Cup is, once again, contested each fall.  In 1887, the Maycroft Cup was originated by the Volunteer Boat Club.  The VBC continued to hold the Maycroft Cup until 1899 when it was transferred to the Sag Harbor Yacht Club and the VBC was disbanded.  The SHYC then offered the Maycroft Cup through 1916.  With the onset of WWI, the Maycroft Cup races ended for eighty years, to be revived in 1997 by then Secretary / Treasurer & Club Historian Ron Lowe and the Club’s Regatta Committee.  It has again become a fixture on the East Ends’ active sailboat racing schedule.

The Sag Harbor Yacht Club offers a number of social functions throughout the year.  We start in early May with our Club commissioning.  In June we have our marine information seminar.  Fourth of July brings our grand fireworks display to the Sag Harbor waterfront.    August is time for the always wonderful Commodore’s Ball.  Early September finds us on our annual Club Cruise Rendezvous to various destinations.  Late September is time for the Maycroft Cup Regatta, and after party on our docks.  There is certainly something for everyone fortunate enough to be called a “member”.

Looking to the future, as the yachting community has begun a new century, surely the Sag Harbor Yacht Club is well positioned and ready to continue its legacy of excellence.
For over one hundred and fifteen years, Sag Harbor Yacht Club has served its members, provided hospitality to and welcomed the marine community, and has been a good neighbor in the local community.  We look forward to continuing our long established traditions. 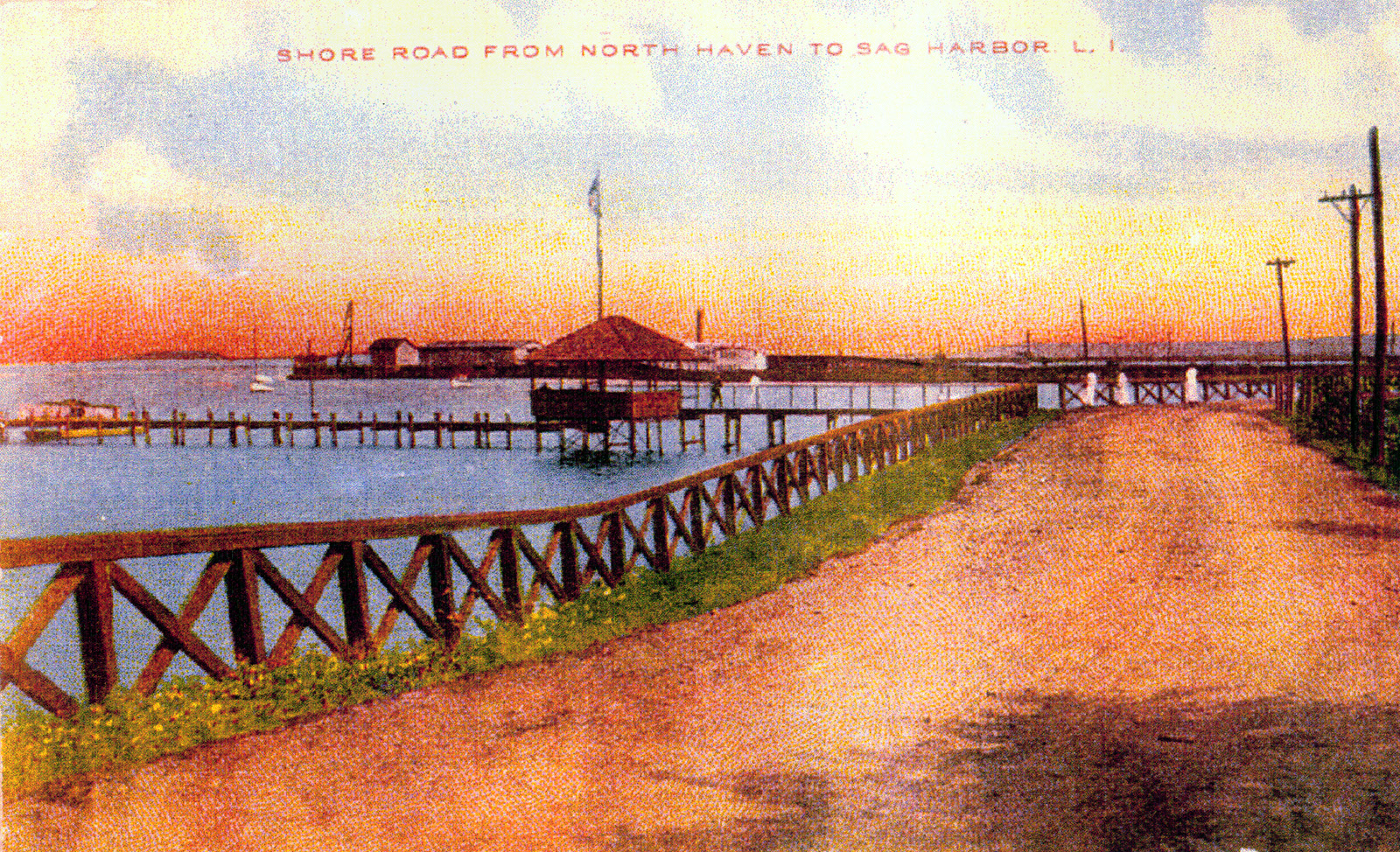